Mongabay Series: Conservation Potential
INTAG VALLEY, ECUADOR — Hundreds of moths land on a white sheet, lit like a false moon in the still, dark forest. Elegant silver ones, fist-sized moths with spots on their wings, fuzzy little citrine fellows, some exquisitely camouflaged in neutral tones, and some shouting their toxicity in vivid color.
For three nights, we lure them with bright lamps and watch as they emerge and dance on the property of Carlos Zorrilla in the Intag Valley, Ecuador — one of the most biodiverse places on the planet.
“On many nights, I see something I haven’t seen before,” Zorrilla said. “After all these years, I’m still finding new species that I haven’t seen in 20 or 30 years … You get a real sense of the biodiversity of a place when you do something like this.”
For decades, Zorrilla has been a leader in the effort to conserve, restore and defend the cloud forests in Intag, and of what he and other locals say is the longest continuous resistance movement against mining in Latin America.
When Zorrilla greets us at the edge of his property on a sunny day in late November, his face doesn’t betray decades of struggle. He smiles broadly under a bushy white mustache, two golden retrievers prancing at his heels. “Welcome to paradise,” he says.
Paradise is an apt description.
Imagine a jungle. Now cool it down, add mist and waterfalls and drape everything in moss and orchids. Remove most mosquitoes. You’re in the cloud forests of the tropical Andes. This ecosystem, which runs through Bolivia, Venezuela, Colombia, Peru and Ecuador, holds nearly one-sixth of all plant species on Earth and more bird species than all of North America.
Past Zorrilla’s tidy white home and unruly garden, a patch of grass sweeps down to a stunning vista: a fortress of forest that rises in peaks across the valley. “Everything you can see is a private reserve. It used to be designated as a Bosque Protector [protected forest], but the government delisted it,” Zorrilla says, raising an eyebrow. “Nice people.”
Ecuador’s relationship with its forests is complex. By the time Zorrilla moved here more than 40 years ago (he’s Cuban by way of California), much of the region had already been deforested.
In the 1960s, to encourage development, the government deemed forested properties with no human occupants “unproductive” and open to land grabbers. In turn, landowners were forced to clear at least 50% of the land to prove it was in use. These agrarian laws led to a flurry of deforestation that lasted into the 1990s.
As a result, less than 15% of Ecuador’s original cloud forests and only 4% of all forests in northwestern Ecuador remain.
Mongabay videographer Romi Castagnino and I came to visit the Intag Valley for our Conservation Potential series, which investigates established conservation efforts in places deemed by experts a high priority for preserving biodiversity.
The tropical Andes are considered the world’s most biodiverse hotspot (places with high levels of diversity that have lost more than 70% of their habitat). The ecosystem ranks first in plant, bird, mammal and amphibian diversity out of all 36 hotspots identified in the world to date, and more than half of its species are found nowhere else on the planet.
Pumas (Puma concolor), spectacled bears (Tremarctos ornatus), mountain tapirs (Tapirus pinchaque), mantled howler monkeys (Alouatta palliata), the critically endangered brown-headed spider monkey (Ateles fusciceps fusciceps), and the colorful plate-billed mountain toucan (Andigena laminirostris) are just a few of the more charismatic threatened species living here. 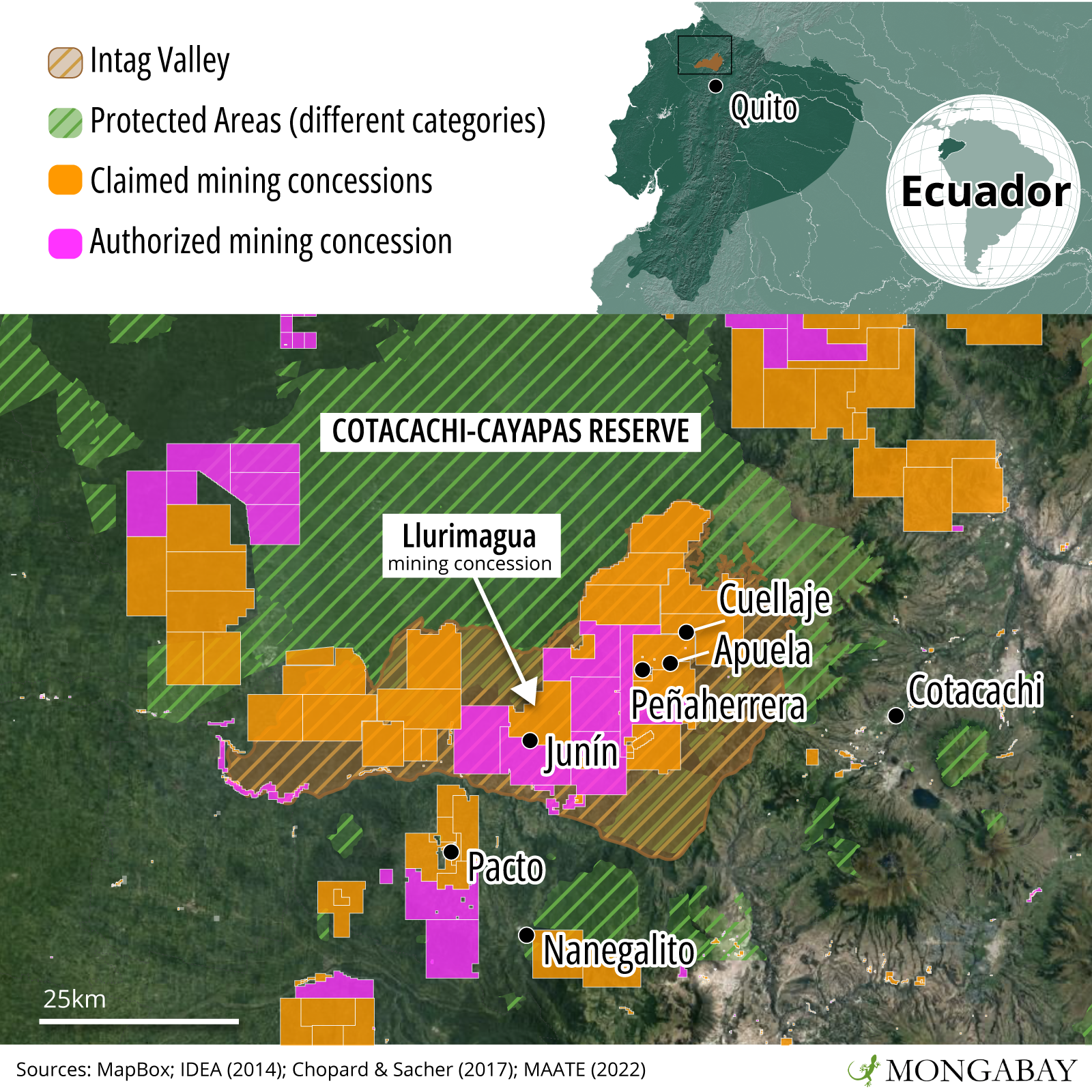 Banner image of Roberto Castro by Romi Castagnino.
Liz Kimbrough is a staff writer for Mongabay. Find her on Twitter @lizkimbrough
FEEDBACK: Use this form to send a message to the author of this post. If you want to post a public comment, you can do that at the bottom of the page.

Mongabay is a U.S.-based non-profit conservation and environmental science news platform. Our EIN or tax ID is 45-3714703.