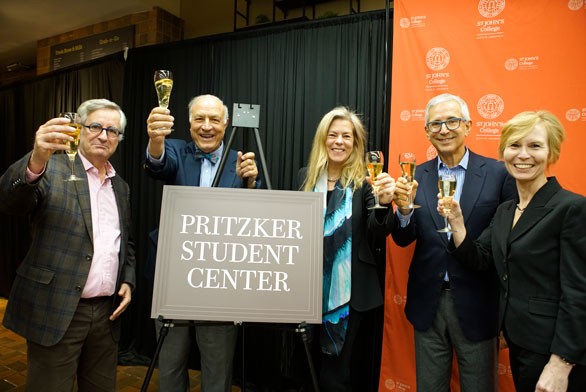 St. John’s College President Mark Roosevelt joins the college’s board chair Ron Fielding, board member Karen Pritzker, Freeing Minds campaign chair and board member Warren Spector, and the college’s Annapolis president Nora Demleitner in a champagne toast to honor the Pritzker family, who have donated $25 million to expand and restore the college’s student center in Santa Fe. Courtesy/SJC
St. John’s College News:
SANTA FE — The student center at St. John’s College (SJC) in Santa Fe is on the National Register of Historic Places, the State Register of Cultural Properties, and Historic Santa Fe’s Register of Properties Worthy of Preservation.
It is the centerpiece of a campus that Architectural Digest has named the “prettiest in America” and one that draws devotees of midcentury modernist designer Alexander Girard from around the world. And now the Territorial Revival masterpiece will undergo a $25 million renovation almost sixty years after its construction.
“Today, we are christening this historic building the Pritzker Student Center in honor of the unflagging support and vision of St. John’s board member Karen Pritzker,” President Mark Roosevelt said at a celebration to thank the Pritzker family for its support.
Attendees included Karen Pritzker – whose son graduated from the college – Annapolis President Nora Demleitner, board chair and alum Ron Fielding, and capital campaign chair and alum Warren Spector.
Funded through a $75 million challenge grant issued by the Jay Pritzker Foundation, the Pritzker Challenge will support campus improvement on the college’s two campuses in Santa Fe, and Annapolis, Maryland.
Pritzker said, “We responded to Mark Roosevelt’s call for a $75 million fund to improve both campuses’ physical infrastructure over the next ten years. It inspired us to challenge other friends and alumni of the college to raise $2 for every $1 our foundation pledges. I am delighted to announce the first major investment in this challenge, sensitively transforming a much-loved building into a 21st -century student center.”
Central to the re-envisioned Pritzker Student Center is the creation of comfortable, safe, and inspiring convening spaces that draw students out of residence halls, away from digital devices, and into conversation. Plans include two new student lounges, a larger bookstore, a renovated Great Hall with enhanced acoustics and aesthetics, a new commercial kitchen, an updated student-run lounge, an interior connection between the bookstore and updated coffee shop, and external second-floor access.
Without a major renovation since 1964, the building will undergo much-needed infrastructure, safety, and accessibility improvements. Aging electric, lighting, plumbing, and HVAC infrastructure will be replaced, creating a more welcoming environment while meeting higher standards for energy and water conservation. The energy efficiency upgrades will follow on the heels of the college’s recent $3.5 million investment in LED lighting, solar panels, and charging stations that will bring the college to a carbon-neutral position by the end of 2023 – all thanks to anonymous alumni support.
Additionally, the $25 million upgrade will include the historic preservation of the building’s Territorial Revivalist style and the restoration of renowned Girard design elements that define the building’s interior. These elements include Girard’s singular murals, whimsical lighting fixtures, tilework, and doors. All extension plans are contingent upon Santa Fe’s Historic Districts Review Board approval.
The Pritzker Challenge is the second major initiative at the college supported by the Jay Pritzker Foundation. The foundation has also funded the Pritzker Promise Bridge Program, which provides the college’s Pell Grant recipients with an automatic 100 percent matching grant. Additionally, the Bridge Program brings underrepresented and economically disadvantaged students to the college for a week of academic preparation and community-building prior to the start of the freshman year.
Philanthropy has positioned the college well as American higher education faces growing economic headwinds: the college will meet its ambitious $300 million Freeing Minds capital campaign goal by June.
The five-year campaign has allowed St. John’s College to accomplish three major campaign goals: balance the college’s budget; lower the college’s former $52,000 tuition by a third; and more than double the endowment by the time all pledges are received.
The campaign is part of the college’s pivot to a new financial model, in which charitable giving will replace shrinking tuition revenue as America’s college-bound population requires increasing amounts of financial assistance. 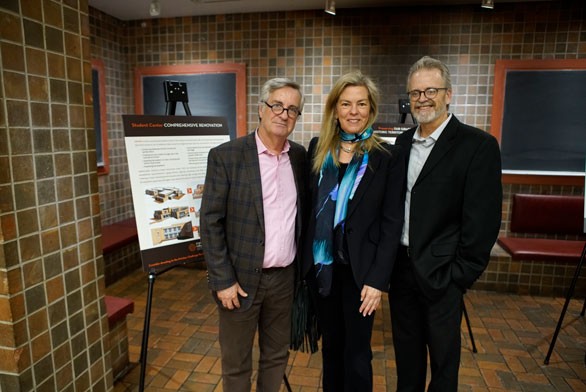 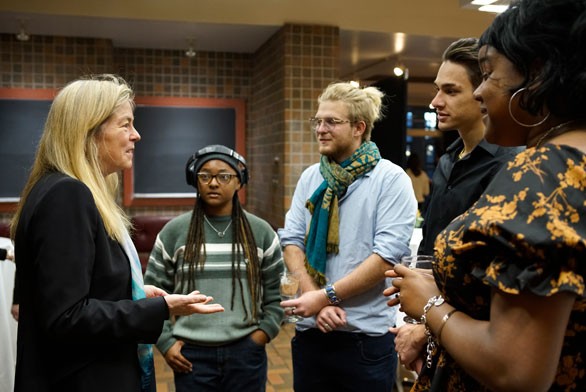 St. John’s College board member Karen Pritzker, whose family recently contributed $25 million to the college, speaks with students in Santa Fe about upcoming improvements to the campus’s student center. Courtesy/SJC
ABOUT ST. JOHN’S COLLEGE
St. John’s College is one of the most distinctive colleges in the country due to its all-required Great Books curriculum. At St. John’s, undergraduate and graduate students read more than 200 of history’s most defining books across dozens of subjects and discuss those books with faculty in small, seminar-style classes. Located on two campuses in two historic state capitals — Annapolis, Maryland, and Santa Fe — St. John’s is the third oldest college in the United States and has been hailed as the “most contrarian college in America” by The New York Times, the “most rigorous college in America” by Forbes, and the “most forward-thinking, future-proof college in America” by Quartz. Learn more at sjc.edu.