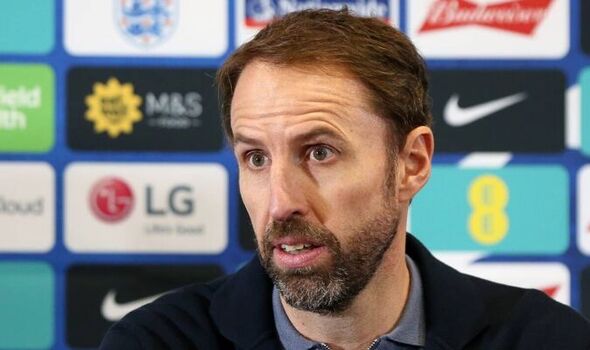 We use your sign-up to provide content in ways you’ve consented to and to improve our understanding of you. This may include adverts from us and 3rd parties based on our understanding. You can unsubscribe at any time. More info
Southgate spoke as he announced 21 out of his chosen 26 players had featured in last year’s European Championships. Captain Harry Kane will be the main striker but stalwarts including Raheem Sterling, Jordan Pickford, and Jordan Henderson also feature.
Last week, Fifa president Gianni Infantino urged teams not to “allow football to be dragged into every ideological or political battle that exists”.
But the 52-year-old England boss said: “It’s highly unlikely we’ll go along with their statement.
“We’ve always spoken about issues we think should be talked about, particularly ones we feel we can affect.”
Qatar has been widely condemned for its ban on same-sex relationships, its repressive attitude to women and a poor safety record for the migrant workers who built the stadiums.
Kane is among eight European team captains who will wear the OneLove armband for matches in solidarity with the LGBT community.
Southgate continued: “We stand for inclusivity and we’re very strong on that.
“It’s important in terms of all our supporters and we understand the challenges of the tournament within that. If it wasn’t for the strength of that community we wouldn’t be Women’s European champions.”
The make-up of the squad means the team of WAGS – wives and girlfriends – will also look familiar.
They include Harry Kane’s wife Kate, Megan Davison, goalkeeper Pickford’s spouse, and Rebecca Burnett, who is married to Liverpool midfielder Henderson.
It is understood they will be staying on a £1billion cruiser which has its own shopping mall and beauty salons.
See today’s front and back pages, download the newspaper, order back issues and use the historic Daily Express newspaper archive.