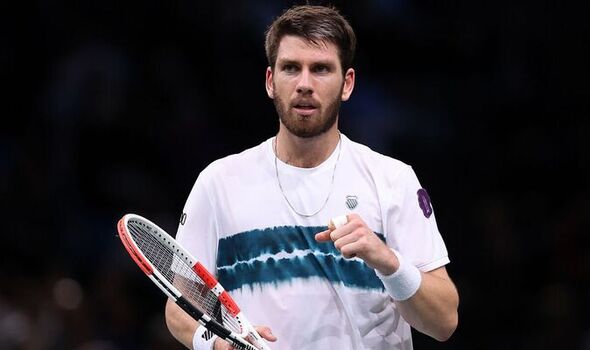 We use your sign-up to provide content in ways you’ve consented to and to improve our understanding of you. This may include adverts from us and 3rd parties based on our understanding. You can unsubscribe at any time. More info
British No 1 Cameron Norrie has been urged to speak out and condemn Saudi human rights abuses after accepting an invitation to play a lucrative exhibition tournament in Riyadh next month. The Wimbledon semi-finalist is to join Daniil Medvedev, Olympic champion Alexander Zverev, Dominic Thiem, Stan Wawrinka and Andrey Rublev at the Diriyah Tennis Cup from December 8-10. Twelve top players will play.
Saudi Arabia has staged Formula One races and big boxing matches as well as investing in Newcastle United and the LIV Golf tour. But the kingdom’s involvement in sport – and their attempts at “sportswashing” – remains controversial with Andy Murray previously stating he has turned down big money offers to play in Saudi because of their human rights record.
Journalist Jamal Khashoggi was murdered by the regime in 2018 while Leeds University PhD student Salma al-Shehab was jailed in August under Saudi anti-terrorism legislation for using Twitter in peaceful support of women’s rights activists.
In a tournament press release, world No 14 Norrie said: “I’m looking forward to playing at the Diriyah Tennis Cup for the very first time in December. It will be a memorable tournament at a unique location and a great experience to come to Saudi Arabia.”
He added in a statement: “I’m not a politician and I don’t feel it’s right for me to get involved with individual government politics. My job is to be a professional tennis player and this event in Saudi allows me to train with some of the best players in the world and to potentially win the Australian Open.”

But Felix Jakens, Amnesty International UK’s Head of Priority Campaigns, said: “We were never going to be telling people like Cameron Norrie where they should or shouldn’t play tennis, but by appearing in Diriyah, Cameron should realise he’s effectively being deliberately hired in to take part in the latest jamboree of Saudi sportswashing.
“Cameron has a big platform and genuine influence, and he should use this to show solidarity with people like Selma al-Shehab who are being cruelly persecuted in Saudi Arabia.
“Earlier this year, 81 people were executed in a single day in Saudi Arabia, we’ve recently seen Twitter users like the Leeds student Salma al-Shehab given huge jail sentences, and there’s been no accountability for the shocking murder of Jamal Khashoggi.
“What Saudi Arabia appears to look for with these competitions is a smiling high-profile sports star who will studiously avoid talking about human rights – Cameron should speak out.”

Norrie has since responded, stating: “I’m not a politician and I dont feel it’s right for me to get involved with individual government politics. My job is to be a professional tennis player and this event in Saudi allows me to train with some of the best players in the world and to potentially win the Australian Open.”
Asked at Wimbledon about the chances of a Saudi breakaway league in tennis to mirror golf, Murray said: “They put on an event in Saudi Arabia a few years ago, and I was offered to play there.
“I would say a lot of the top players and bigger names turned it down. And I, personally, wouldn’t go and play there.” And his agent Matt Gentry said earlier this year: “He’s turned down stuff in Saudi.
“I don’t think he will play there just because of what’s gone on. “They have done a few exhibition matches where they have paid eye-watering sums of money to get players over there and he just wasn’t interested. For turning up and playing a match, if you are a former No 1 player in the world, in the Middle East you could potentially earn $1million to $2million.”
See today’s front and back pages, download the newspaper, order back issues and use the historic Daily Express newspaper archive.