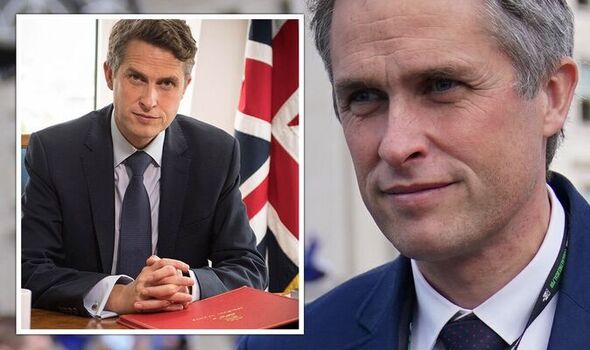 We use your sign-up to provide content in ways you’ve consented to and to improve our understanding of you. This may include adverts from us and 3rd parties based on our understanding. You can unsubscribe at any time. More info
A Ministry of Defence official told the Guardian Williamson made remarks in a meeting with civil servants and separately told them to “jump out of the window”. But the ex-minister denies the claims, reported in the Guardian on Monday evening.

A Whitehall aide, who worked closely with Williamson, told the publication of the bullying allegations where they felt “deliberately demeaned and intimidated”.
The behaviour was reportedly flagged to the head of HR at the MoD unofficially but a formal complaint was not instigated.
Williamson, who held the role for two-and-a-half years until May 2019 when he was sacked over a national security council leak, allegedly “shouted” and “raged”.
He denied he bullied a civil servant and claimed to have “good working relationships” with officials, the paper reported.
However, it claimed he is not denying using those specific words. Nor is he admitting to using the words.

A statement from Williamson said: “I strongly reject this allegation and have enjoyed good working relationships with the many brilliant officials I have worked with across government.” He added that “no specific allegations have ever been brought to my attention”.
A Cabinet Office spokesman added: “The Cabinet Office has not received notice of any formal complaints about Gavin Williamson’s behaviour from his time at the Ministry of Defence or any other department.”
Downing Street said Number 10 had full confidence in the Cabinet Office minister despite bullying claims emerging amid abusive text messages sent to former Conservative Chief Whip Wendy Morton.
At COP27 in Egypt, PM Rishi Sunak said an independent complaints investigation is happening “and it’s right that we let that process run its course before passing judgment”.
He added that while he wants to see the results of that “I’ve been very clear that language is not right, it’s not acceptable.”
He welcomed the fact Gavin Williamson “has expressed regret about that and now we wait to see what the investigation says”, he added.
See today’s front and back pages, download the newspaper, order back issues and use the historic Daily Express newspaper archive.