Keep Salon Independent
This recap contains spoilers for Season 3, Episode 4 of the Apple TV+ show “See”
It’s hard to know what to make of “See.” The show is unrelentingly dark, both in story, theme and visuals, with many scenes so dim, it’s difficult not to feel like it’s all supposed to be a metaphor. The Apple TV+ series is about a future where a deadly virus has resulted in most people in the world being blind. Those very few born with sight are considered, alternatively, as witches or as saviors to disabled people.
As The A.V. Club writes, “That vision would be considered a super power to blind people, who have managed to restore civilization without it — smacks of ableism, but that isn’t ‘See’s’ only trouble.” It has a blindness consultant. (And disability consulting is unfortunately some of the lowest-paid work in television and film.) The show also boasts of a large blind cast and actors who are low vision, though none of them appear to be in leading or major roles, which are played by seeing actors with eyes digitally altered by special effects.
It’s somewhat depressing that this is considered a huge step for disability in Hollywood, but here we are with Jason Momoa as Baba Voss, the leader of a dystopian, blind tribe and adopted father of young adult twins who can see. Their mother, Maghra (Hera Hilmar) was pregnant by the mysterious Jerlamarel (Joshua Henry), a kind of seeing prophet with not the greatest intentions, when she first stumbled into the tribe’s encampment. Last season, Jerlamarel was killed as was beloved elder Paris (the great Alfre Woodard), and this season started with the characters, once a tight family unit, scattered.
Related
“See” is on its third and final season and we’re headed for an ending as seemingly dark as its beginning. Episode 4 both sets characters off on their own journeys and by the end, brings some back together.
Sibeth (Sylvia Hoeks) formerly known as the queen, escapes and covers herself in animal manure to get past guard dogs. It’s not pleasant, but neither has most of her reign been. With dramatic piano chords benefitting “The Phantom of the Opera,” she wanders in the woods.
The show is best when it’s groups of people bantering in the woods, as opposed to wallowing in damp industrial buildings.
Momoa’s Baba Voss is really great at two things: fighting people and being a good dad. Now he’s a great grandad to “a boy named Wolffe and a dog named No.” He leaves his dog, at first reluctant to have the companion all but now beloved and proven, guarding his grandson whose reluctant father is Kofun (Archie Madekwe). Kofun of course was seduced by the former queen Sibeth, who is both older, creepy and happens to be his aunt. How “House of the Dragon” of them. Kofun feels guilty for helping Sibeth to hide before her escape. 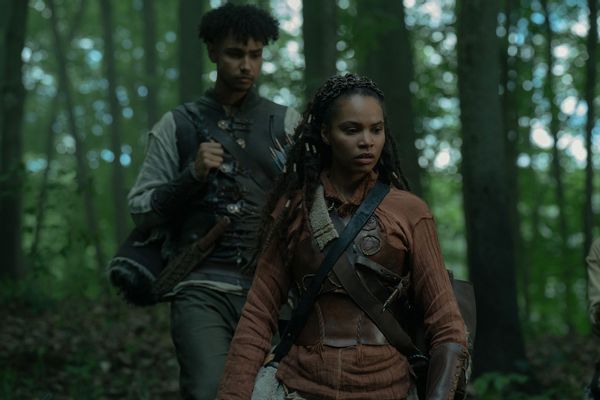 Archie Madekwe and Nesta Cooper in “See” (Apple TV+)
Baba Voss, Kofun, Haniwa (Nesta Cooper), the likable Wren (Eden Epstein) and the hilarious Charlotte (Olivia Cheng) set off to rescue Jerlamarel’s kids. The show is best when it’s groups of people bantering in the woods, as opposed to wallowing in damp industrial buildings, so it’s nice to see the band head off on a merry side quest. Time in the woods allows Baba Voss and Kofun to have a heart to heart. Baba Voss is good at those too. “Stay alive, my boy,” he advises before slapping him on his wound.
Animal manure is a recurring theme this episode.
Meanwhile, Ambassador Trovere (Trieste Kelly Dunn) and Lord Harlan (Tom Mison) are off on their own, flirting. Oops, Harlan has fallen in love with the woman he was forced to marry, new queen Maghra. He breaks off from the ambassador and heads with “some associates” to sneak into the city.
Baba Voss takes his group to the site of Bow Lion’s death. The sighted kids examine the damage made by new-fangled explosions and Baba Voss convinces Ranger to join their cause by invoking the name of Tormada, the scientist who created the bombs that killed so many already. 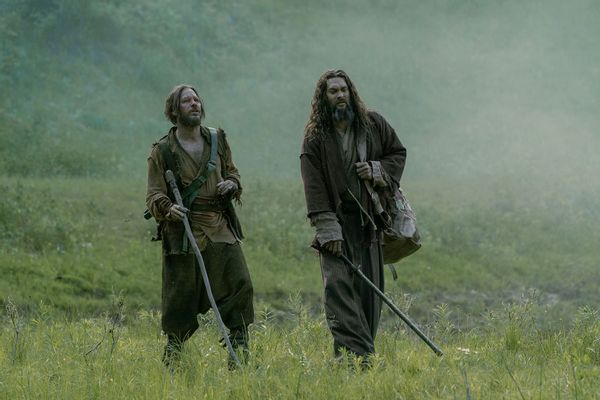 Michael Raymond-James and Jason Momoa in “See” (Apple TV+)
Animal manure is a recurring theme this episode as Harlan sneaks into Trovere’s city whilst hiding in a rattling wagon of livestock. “Did it have to be chickens?” he asks, like someone from another century who knows of “Indiana Jones. “
Sibeth struggles to make it alone in the wilderness, doing an admirable job of smacking her lips after eating insects off a log while Harlan in his storyline delivers news of the advanced weapons headed the city’s way. Sibeth’s not actually alone either as there are wolves in these here woods. Mad scientist Tormada makes his case for explosions in front of the council. A demonstration is apparently in order. Harlan won’t stop talking long enough to escape. I mean, he just wants the details.
Harlan makes it but much of the council do not, and the lord realizes that the sexy ambassador was in on it the whole time, though she swears she didn’t have a choice. She gives Harlan a choice, though, to “live at the top of the new order.”  But Harlan is nothing if not stubborn. 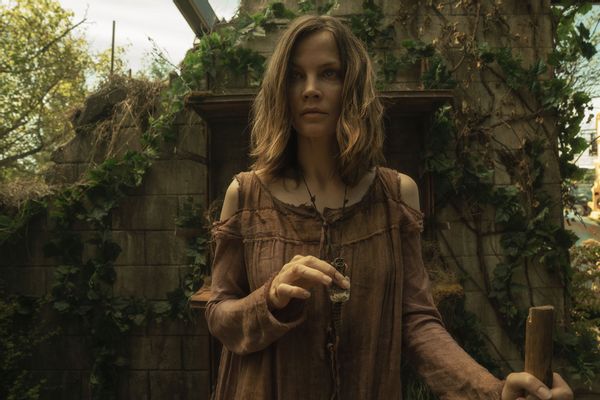 Sylvia Hoeks in “See” (Apple TV+)
It rains on Sibeth, the show perhaps finally deciding that her character is more camp than anything else. And there’s more than one “Indiana Jones” nod in this episode, with Indy’s least favorite reptile finding our least favorite royal. Sibeth’s more Rasputin than queen, as she apparently lives to be annoying another day.
Want a daily wrap-up of all the news and commentary Salon has to offer? Subscribe to our morning newsletter, Crash Course.
We get an insight into the bomb factory where some of Jerlamarel’s children are forced to work. Time for Baba Voss to work his magic and the women too, who rescue the children. Maghra fights in her administrative way, which is asking for a vote to finally begin an official battle.
“See” keeps threatening war and perhaps like the downpour on Sibeth (and Maghra, who’s waiting vainly for her lost sister outside, and on Baba Voss in his own storyline), the bombs mean it finally will rain firepower upon the fractured kingdoms.
“See” releases new episodes Fridays on Apple TV+.
Read more
about disability and Hollywood

Alison Stine is a staff writer at Salon. She is the author of the novels “Trashlands” and “Road Out of Winter,” winner of the 2021 Philip K. Dick Award. A recipient of an Individual Artist Fellowship from the National Endowment for the Arts (NEA), she has written for The New York Times, The Guardian, and others.
Copyright © 2022 Salon.com, LLC. Reproduction of material from any Salon pages without written permission is strictly prohibited. SALON ® is registered in the U.S. Patent and Trademark Office as a trademark of Salon.com, LLC. Associated Press articles: Copyright © 2016 The Associated Press. All rights reserved. This material may not be published, broadcast, rewritten or redistributed.