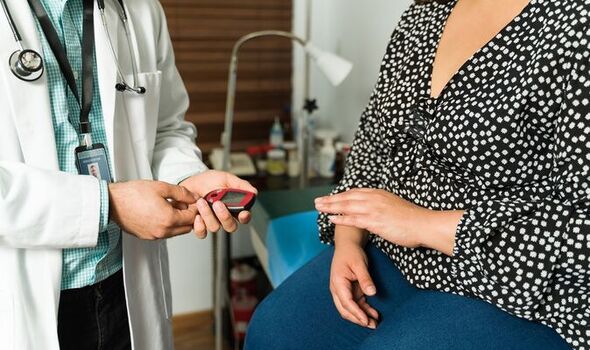 We use your sign-up to provide content in ways you’ve consented to and to improve our understanding of you. This may include adverts from us and 3rd parties based on our understanding. You can unsubscribe at any time. More info
It more than halves the risk of the disease in overweight individuals, according to new research. A US team hailed the injection as a “game changer”. It contains an appetite-suppressing drug called semaglutide.
Lead author Dr Timothy Garvey, of the University of Alabama, said: “Semaglutide reduces the future risk of diabetes by over 60 per cent in patients with obesity.
“This figure is similar whether a patient has prediabetes or normal blood sugar levels.
Sustained treatment is required to maintain the benefit.
“Given the rising rates of obesity and diabetes, semaglutide could be used effectively to reduce the burden of these chronic diseases.”
The medication, branded Wegovy, makes people feel fuller and not as hungry – so they eat less.
Medicines watchdog NICE (National Institute for Health and Care Excellence) has recommended it should be made available on the NHS.
Around five million people in the UK have diabetes – with 90 percent of cases the type 2 form caused by unhealthy lifestyles. Obesity raises the risk sixfold.
A study of 1,961 overweight or obese Americans found those given the therapy for 16 months were 61 percent less likely to develop diabetes – over the next decade.
All received weekly 2.4mg doses for 20 weeks. They then either remained on semaglutide or were switched to a placebo for the next 48 weeks.
The former shed an average 17 percent of body mass – about two stone for a 15 stone individual. Benefits were not seen in those who stopped the medication.

Results were confirmed by a second trial of 803 vulnerable participants. After 20 weeks, risk rose to over 15 percent in those who switched to the dummy drug.
But it continued falling among peers who carried on – indicating sustained treatment is needed.
All participants received advice on diet and exercise. A tool called CMDS (Cardiometabolic Disease Staging) predicted diabetes risk in the next ten years.
It uses a formula based on sex, age, race, BMI (body mass index) and blood pressure as well as levels of blood glucose and fats – and has been shown to be highly accurate.
Semaglutide could provide an alternative to gastric bypass surgery where patients are fitted with a band to reduce calorie intake.
It was recently approved in the US as an obesity treatment. NICE’s draft guidelines for England and Wales, not yet fully approved, say it should be prescribed to obese adults.
Dr Garvey said: “It appears to be the most effective medication to date for treating obesity and is beginning to close the gap with the amount of weight loss following bariatric surgery.

“Its approval was based on clinical trial results showing that it reduces weight by over 15 percent on average when used together with a healthy lifestyle programme.”
“This amount of weight loss is sufficient to treat or prevent a broad array of obesity complications that impair health and quality of life and is a game changer in obesity medicine.”
Obesity affects about one in four British adults – increasing the risk of a host of life-threatening illnesses.
Helen Knight, from NICE, said: “We know that management of overweight and obesity is one of the biggest challenges our health service is facing.
“It is a lifelong condition that needs medical intervention, has psychological and physical effects, and can affect quality of life.”
The findings were presented at a European Association for the Study of Diabetes (EASD) meeting in Stockholm.