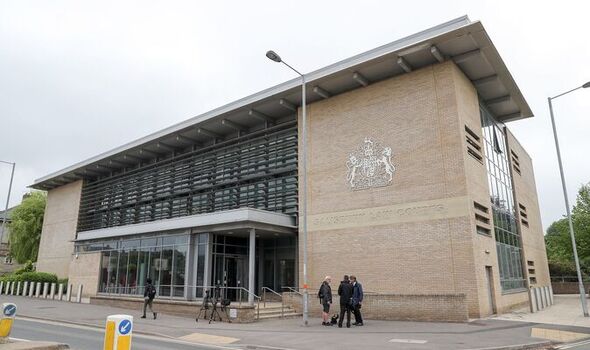 We use your sign-up to provide content in ways you’ve consented to and to improve our understanding of you. This may include adverts from us and 3rd parties based on our understanding. You can unsubscribe at any time. More info
Peter Gardner, 82, drove into James Tassell in daylight, throwing the grandfather into the air. Mr Tassell, 70, was on a country road at 10am on a clear day when Gardner ploughed his Vauxhall Vectra into the back of him.

Drivers must be able to read a number plate from 65ft – but a test showed Gardner could not manage further than 9ft 10in.
The ex-rail worker had recently been told by an optician that he might be developing cataracts but had not booked a follow-up appointment.
He was jailed for six months as Mr Tassell’s family labelled him “arrogant” for “choosing to drive with terrible eyesight”.
Salisbury Crown Court heard that the cyclist, known to friends as Jim, was riding near Andover, Hants, when he suffered traumatic injuries.
Mr Tassell, of Andover, died five days later.
Berenice Mulvanny, prosecuting, said a driver stopped to give first aid and the OAP told him the cyclist was “in the shadows”.
She added in court: “His eyesight was so poor he shouldn’t have been driving.”

Mr Tassell was about to mark 50 years married. His widow Stephanie told Gardner: “[He was] a true gentleman. For what you did to me and my family I will never forgive you.”
Their son Ben said Gardner robbed “my mum of her husband and of her world” while daughter Emma added: “You should not have been behind the wheel of a car. You have robbed my children of ‘the best grandad.’”
She called Gardner “selfish and incompetent” for “choosing to drive with terrible eyesight”.
Ian Bridge, defending, said Gardner “did not believe, living alone and isolated, that his eyesight was as bad as he now completely accepts it is.”
Mr Bridge added: “He should have realised [how bad his vision was], but he didn’t. He just hopes the court accepts that it wasn’t a deliberate decision.”
Judge Andrew Barnett said: “Carelessness and lack of concern about your failing eyesight is something that has got to be punished. I trust you will, in practical terms, never drive again.”
Gardner, of Whitchurch, Hants, admitted death by careless driving.
He was jailed for six months and banned from driving for three years and three months.

Sorry, we are unable to accept comments about this article at the moment. However, you will find some great articles which you can comment on right now in our Comment section.
See today’s front and back pages, download the newspaper, order back issues and use the historic Daily Express newspaper archive.