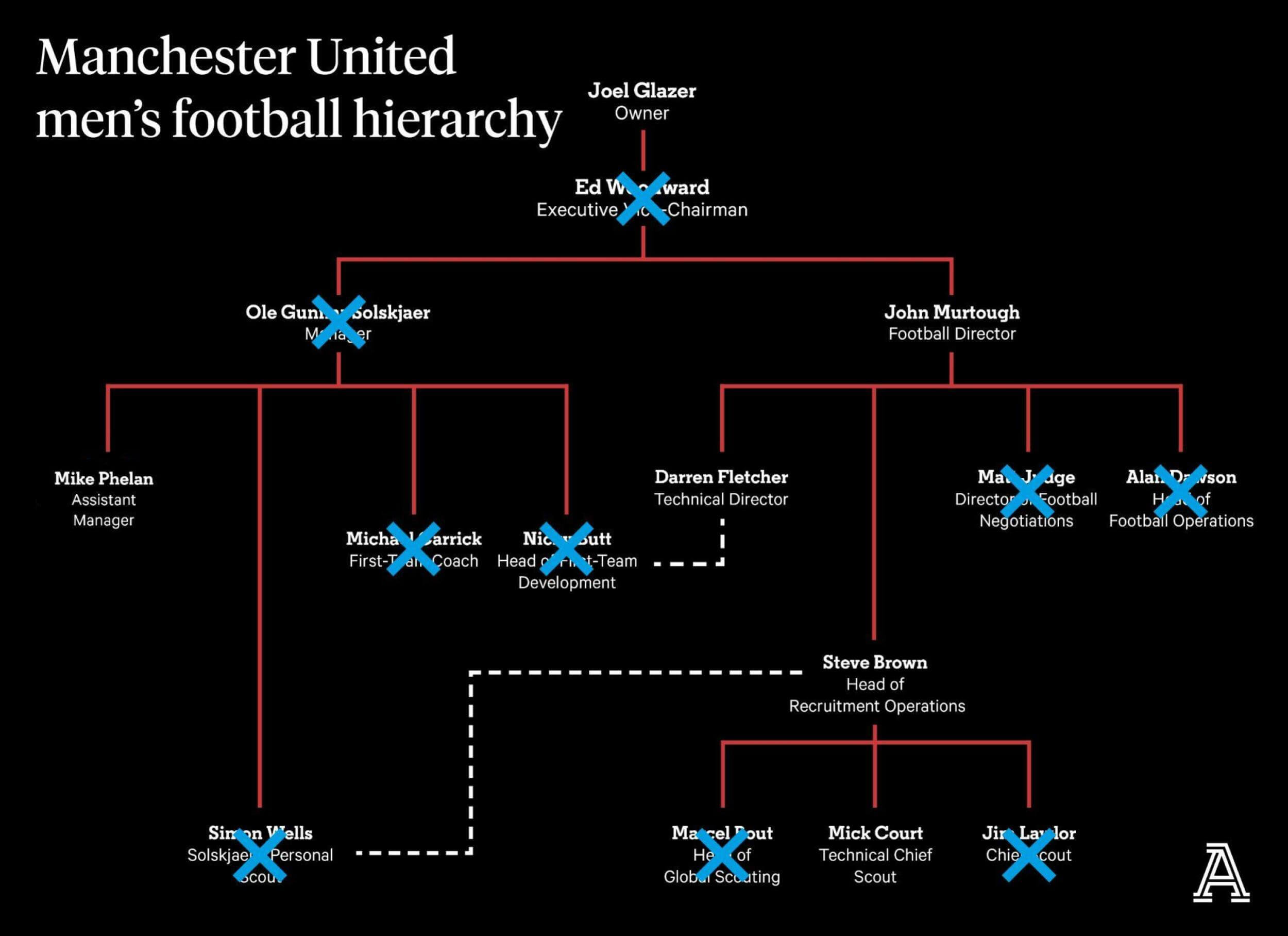 “Under Woodward, United was a very CEO-led organisation,” says a football industry expert. “He reported directly to the owners and everyone reported to him.
“That sounds very clear, doesn’t it? But it actually stifles decision-making. All authority is centralised and there is no delegation. Nobody is empowered to think. And if the CEO gets blindsided by the football side of the business, nothing else happens. Whole aspects of the business can be ignored. But they have got good people and a lot of those people know what’s wrong and are hoping there will be a rebuild.
“I’ve got a lot of time for John Murtough (football director) and what he’s doing. He’s putting in place some processes and structures that should bear fruit. And it looks like Richard Arnold is a lot more willing to delegate and listen than his predecessor. But I’m still not convinced they are doing the full rebuild they need.”
There are some, including those who worked at United during the greatest days, who believe the movement in the boardroom has been overplayed.
“United have been here a few times before,” says a former senior member of staff. “I remember conversations about United’s DNA, cultural resets and reboots but, in recent years, the problem has been that United mean slightly different things to different people.
“When the club was at its best, we all knew what success looked like: the first team winning trophies. Everything fed into that goal. If we just look at the recruitment in recent years, I think we’ve perhaps got too focused on signing the star name — Pogba, Angel Di Maria, Alexis Sanchez — and not thinking enough about the squad.
“It sounds stupid but it really is all about the team. When they are doing well, everything gets easier. You can see that with the various protest groups over the years. When the team struggles, momentum builds. But if they win three games 4-0, it calms down again.”
Those runs have been few and far between, though, placing United’s footballing vision constantly under the microscope. Winning football matches can hide a multitude of sins but it grows increasingly difficult to recall the last great team built at Old Trafford.
The footballing hierarchy at United effectively now revolves around Murtough. He was appointed the club’s first football director in March 2021, a role United never previously felt necessary. 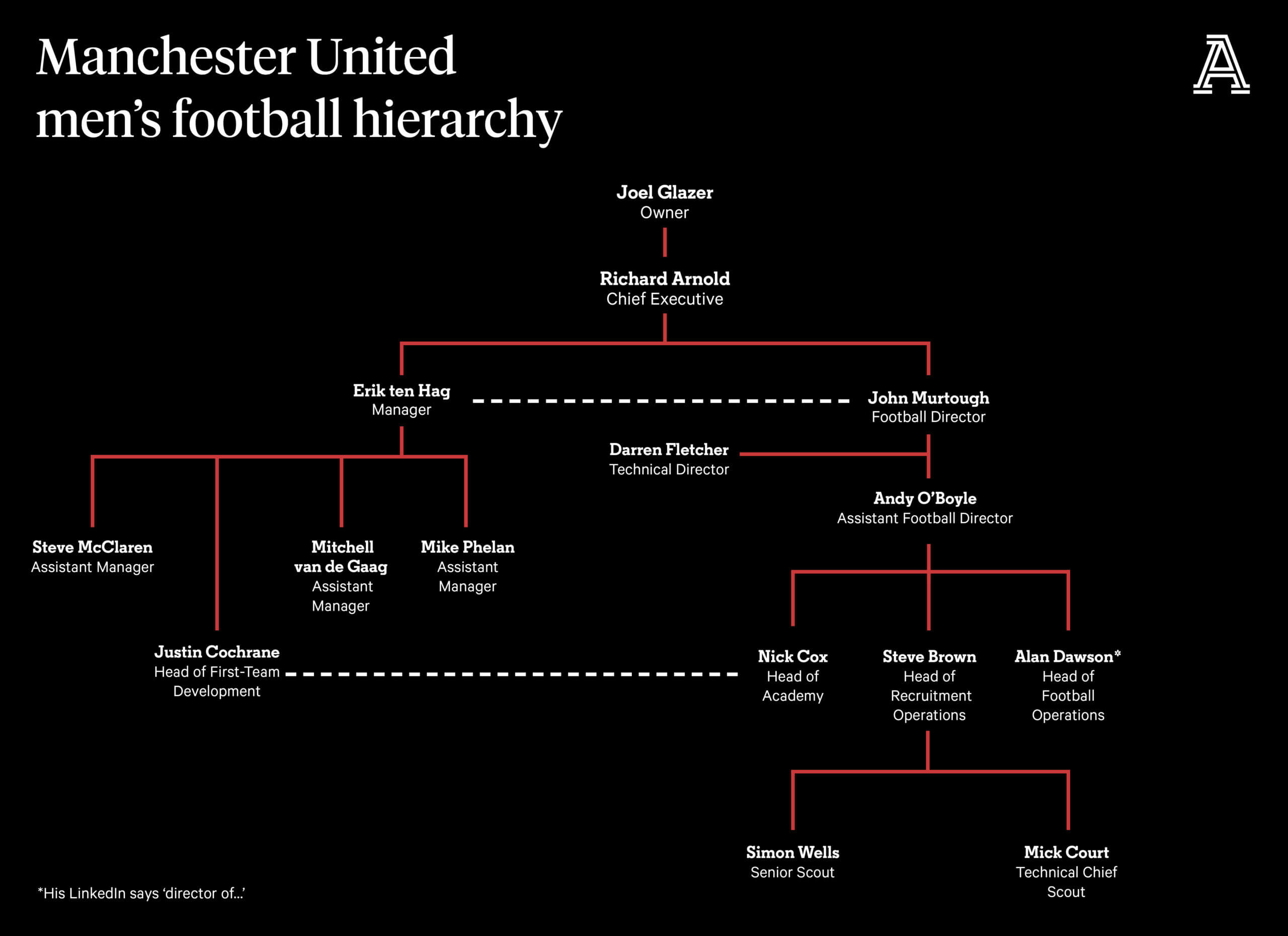 So long as they hold their enormous fanbase, both at home and overseas, United will, though, continue to be a brand to which companies are drawn.
“It’s going to take a generation before you see a marked effect because they have this huge following,” says Tim Crow, a sports marketing expert. “Although there will be people who say fans come and go and there is some truth in that, with fans following players around, United have this huge draw.
“That came in the growth of the Premier League, the Ferguson team and all the star power. The club continued to build on the back of what had come before and they undoubtedly have one of the top two or three fanbases in the world.
“That is not going to change anytime soon although it will erode if they continue not to perform at the absolute highest level. Who is getting the new fans now? That’s where United might have a problem down the road. They’re not at the top of the game so they’re not hoovering up the new fans like they used to.
“It would still take a generation before you saw any real change. It’s the same with Liverpool, who have an enormous fanbase. They had two or three generations of fans living with success, grandfathers, fathers and sons had passed it on while they won leagues and cups. That doesn’t go away.”
Contributors: Philip Buckingham, Laurie Whitwell, Matt Slater, Adam Crafton, Dan Sheldon, Felipe Cardenas, Andy Mitten, Peter Rutzler
(Design: Kris Sheasby for The Athletic)